During the pandemic some things changed in our lives, among those new things some of us felt like reinventing ourselves.
In my case, I had the experience of teaching programming for children with scratch, so I decided that it might be a good idea to get started in the world of creating video games for cell phones. Some time ago I had seen that there was a free software program called Godot that allows the creation of video games in a simple way, but I had left it a little aside because at that time I had no time, so with the prospect of the pandemic in the middle I decided to give this program a chance.

Previously I had seen programs like “unity” or “unreal” and the truth is that they had scared me a little bit because of the complexity of the interface, they seemed gigantic and too complex programs, but I didn’t have that feeling with Godot, so I decided to give it a try.
Godot has one thing that I love and that is the way it structures the game you are creating. In Godot everything is scenes and nodes; for example, imagine you are in a car racing videogame, in this case the track is a scene, the car is a scene, the driver is a scene and in turn the wheels and the steering wheel can be a node of the car scene. That car’s scene can be in several scenes and so when you modify something in the car scene it will be changed in all the scenes that have in turn the car scene integrated.

That way of structuring the games as a tree in which everything is related and when you can go forward or backward in that structure to change things for my way of thinking is very logical and works very well for me. It was probably what helped me the most to start creating video games with Godot.
Little by little and with the help of some tutorials I made a program that taught the multiplication tables to the little ones. At that time my son was learning them and I saw that one of his problems was that he did not see visually what the multiplication tables were so it occurred to me that it might be a good idea to do this in the form of an App. That first program took me about three weeks to make and the satisfaction of seeing how it worked on the mobile once published was decisive to have the final impetus to launch myself into the adventure of creating video games for mobile devices.
A year and a half later I have 7 games published in both the Apple Store and the Play Store and I have 3 more ready to be published soon.
During this time I have learned a lot of things and I have made many mistakes, in future articles I will explain in more depth what I have learned and where I have made mistakes so that my experience can help you. 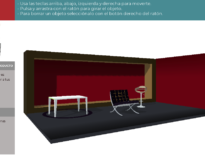 VIdeogames development Demo of a 3D environment created with Godot